According to REINZ, unconditional sales hit their lowest level for a December month since 1995. And the 4,336 sales picked up by REINZ at the end of last year fell short of the figure recorded back in 2008 by one.

Regardless of any future revisions to December sales data, the level of activity is indicative of a weak housing market, say Kiwibank economists, Jarrod Kerr, chief economist, Jeremy Couchman and Mary Jo Vergara.

House prices posted further losses. The REINZ House Price Index (HPI), down 1.3% seasonally adjusted, recorded the 13th consecutive monthly fall. Over the December quarter as a whole, the HPI was 12.7% down on a year ago in line with Kiwibank’s latest forecast. And the median house price across th4e country managed to fall back below $800k. However, to put current house price falls in context prices are back to levels seen in early 2021.

Adding to the downward pressure in prices is the growing supply of listed property, despite fewer new listings each month says Kerr. Total listed property is trending higher according to realesate.co.nz. Listings of 26,000 plus were registered with the site in

Potential vendors are under no pressure to sell at present. The jobs market is strong. “Those that transacted in the market at the peak 12-18 months ago, selling now would likely realise losses,” says Kerr.

Properties are taking much longer than average to change hands too. The median number of days to sell (seasonally adjusted) stood at 47 days for the third consecutive month compared to the survey average of 39 days

Kerr says given the backdrop of a slowing economy, and a large chunk of mortgages rolling onto higher fixed rates, house prices have further to fall. “We still see house price falls trough in annual terms at -15% in the current quarter. And house prices will continue to fall beyond the this quarter, but just at a slower pace. Our forecast suggests a peak to trough fall in house prices of 21%. A recovery in the market appears a long way off, perhaps a 2024 story. However, on the demand side net migration is turning around quickly and will see population growth pick up.” 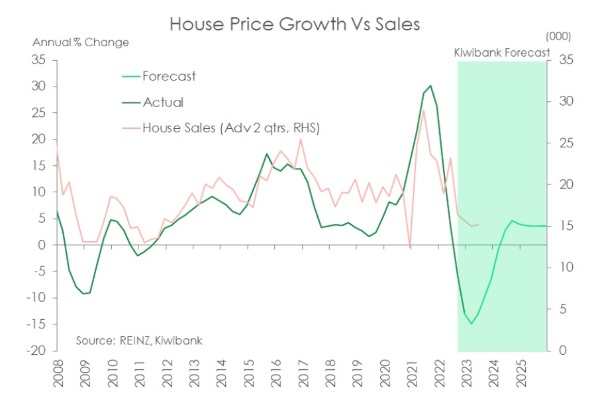 Kerr says there are clear risks to Kiwibank’s outlook. It believes the RBNZ may deliver too much in the way of rate hikes and monetary tightening. That includes the likely 75 basis point hike in the cash rate next month to 5%, Although it would advocate a lesser move (25, not 75). He says markets are moving in favour of reduced rate hikes. “The economic pendulum is clearly swinging towards downside risks, rather than upside risks. We continue to forecast a peak in the RBNZ’s cash rate in coming months, and a likely cut to that cash rate by year-end.”