In Westpac’s latest Economic Bulletin senior economist Satish Ranchhod says the pressure on household finances is set to become more intense this year with many borrowers due to roll off low fixed mortgage rates. The resulting large increase in fortnightly interest payments will take a big bite out of many households’ disposable incomes.

He says as interest rate increases ripple through the economy, house prices will continue to fall and domestic spending will decline. That will underpin a broader slowdown in economic growth, with unemployment rising over the coming years.

“The impact of these tougher financial conditions will be felt across the economy. However, there will be some big differences across household groups. Notably, those who bought their first home in the past couple of years will see their finances being squeezed especially hard.”

The dampening impact of interest rate hikes is already being felt in the housing market. Since the RBNZ’s tightening cycle began in 2021, median house prices have fallen by an average of $112,000 across the country, a drop of 12%.

“House sales  have dropped to their lowest level in more than a decade (barring the lockdown period in 2020). The weakening in the housing market has been widespread and has been especially stark in larger centres. Notably, prices in Auckland have fallen about $230,000 from their peak, while prices in Wellington are down $201,000,” says Ranchhod.

With interest rates continuing to push higher, Westpac is forecasting nationwide house prices will fall by a further 10% over 2023 and 2024 combined. Coming on the back of the falls already seen, this will leave prices down 21% from their peak in 2021.

New Zealanders hold a large amount of their wealth in owner occupied or investor housing. Consequently, the fall in prices now in train represents a sizeable knock to many households’ net worth. Ranchhod says combined with the related impact on confidence, this will be a large drag on spending appetites. The downturn in the housing market will also add to the increasing headwinds in the residential construction sector.

Conditions for borrowers are set to become a lot tougher over the coming year. Close to half of all fixed-term mortgages will come up for repricing over the next 12 months.

In many cases, those borrowers will face refixing at substantially higher interest rates. For example, says Ranchhod borrowers who fixed for two years in 2020 may have secured a rate in the 2.5% to 3% range. Those same borrowers are now looking at a two-year rate that’s more than 3 percentage points above what it was back then.

“The resulting increase in debt servicing costs will take a large bite out of many households’ disposable incomes. For instance, if a borrower bought an average-priced house in 2020 and took out an 80% mortgage fixed for two years, their minimum fortnightly payments in most parts of the country will rise by about $470 per fortnight if they re-fixed their mortgage today. If they live in Auckland, that increase in debt servicing costs will be about $800 per fortnight. On average, the borrowers in this example will need to spend about 12% more of their disposable income to meet the minimum repayments on their mortgage.”

He says for many borrowers, that increase in mortgage payments will more than offset the strong growth in incomes over the past two years.

While the tightening in financial conditions will be felt across the economy, the impacts will be very different across households, says Ranchhod.

“For those households who took out a mortgage several years ago, the fall in interest rates in recent years has been a sizeable financial windfall. It’s allowed them to increase their savings while also spending more.”

For example, last year the NZ Bankers’ Association reported almost half of borrowers were ahead of their scheduled loan repayments. That increase in savings is now providing a buffer from the other factors that are squeezing their purchasing power.

“In addition, while these borrowers are looking at potentially large increases in their interest payments, that is a rise from historically low levels – interest rates are ‘only’ going back to the sort of levels these borrowers faced during the past decade.

“In contrast, for those households who first took out their mortgage over the past one to two years, the interest rate increases now in train signal a much larger squeeze on their finances. In addition, these borrowers will not have had the same chance to rebuild their savings since buying a home. Consequently, the rise in borrowing costs is likely to impose a much larger drag on their spending. Compounding the financial pressure on these households, many of them will have seen the value of their homes falling since taking out a loan.”

Only around one-third of homes have mortgages, says Ranchhod however, other households are also likely to be affected by the tightening in financial conditions already in train.

–  For those who own their home outright or have a mortgage free investment property, the falls in house prices as interest rates push higher signals a sizeable fall in the value of their assets. That’s likely to have a dampening impact on their confidence and spending.

–  Those households who rent are not directly exposed to either the rise in interest rates or the fall in house prices. However, they could still be affected if higher financing costs pass through to housing rents (which have already risen 4.6% over the past year). Tighter financing conditions could also make it tougher for these households to purchase a home.

– Furthermore, all households are being affected by the recent rapid increases in living costs. In addition, the weakening in the labour market could have wide reaching implications for jobs and earnings growth for many households across all parts of the economy. 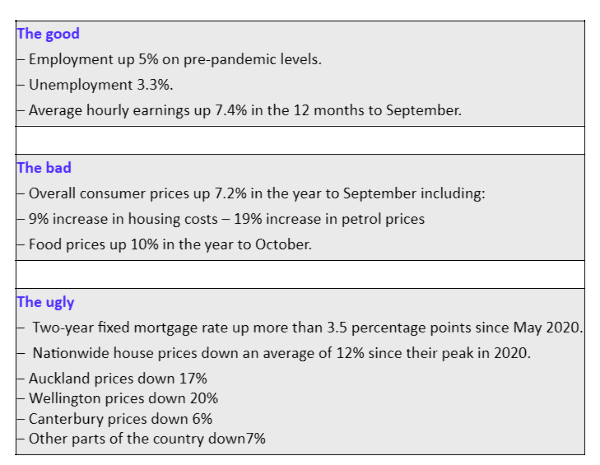 Up Next Housing policy curve balls and election inertia

We are now constantly being told that the Reserve Bank is raising mortgage interest rates in order to reduce demand in the economy.
I cannot see how that works.
If my mortgage interest rate increases so I now have to pay $500 more to the bank each month. That money does not disappear, it goes into the bank.
So the bank now has my $500.
What do they do with that money?
As I see it, they can do three things (probably a mix of all three):
- they can pay a higher interest rate to those people who have deposits at the bank
- they can pay the bank staff a higher salary
- they can pay higher dividends to their shareholders.
So admittedly my spending has been reduced but the banks depositors, their staff and/or their shareholders have more money to spend so surely that makes up for my reduction?
So could you explain how do higher interest rates actually reduce overall demand in the economy?
I have asked the question on many forums, but no-one can goive a cear answer.