The agency sells one in three houses across the Auckland region and says the monthly downward slide in house prices in the country’s biggest city came to a halt last month, with the median sales price remaining constant with that for July while the average price increased.

Previously, the average sales price had fallen four months in a row, but in August that trend was reversed with the average price over the previous month increasing by 3.1% to $1,157,899. The median price at $1,111,000 remained consistent with that for July.

Rather than signaling that prices are on the increase, this reversal is likely to be an indication that prices are plateauing, says Peter Thompson, Barfoot & Thompson’s managing director.

Where the market is really seeing change is in the number of properties being sold. Just  578, were sold in August, the lowest number in a month since the Covid-affected sales months in mid-2020.

:Given that there are buyers in the market, the combination of low sales numbers and stable prices indicates that vendors believe prices are bottoming out,” says Thompson

New sellers are continuing to enter the market, and in August the agency listed 1,394 new properties, its highest number of new listings in the month of August for six years.

At month end Barfoot & Thompson had 4,637 properties on its books, the highest number of listings at the end of August for 11 years.

With high new listings, including new builds entering the market for the first time and a solid base of existing properties, the market is entering the normally buoyant spring buying season with an range of properties and choice for buyers. 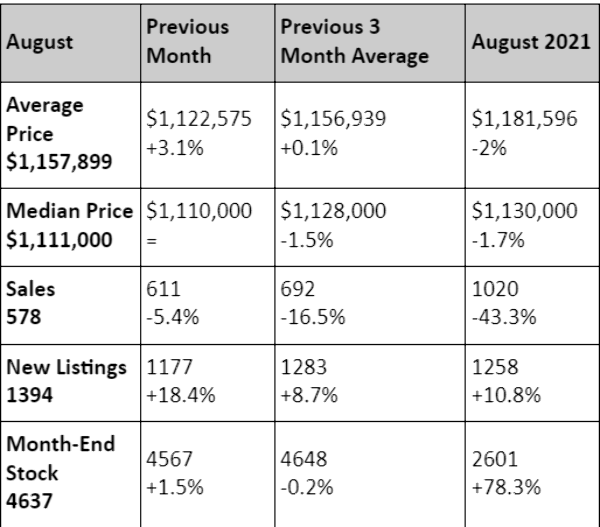